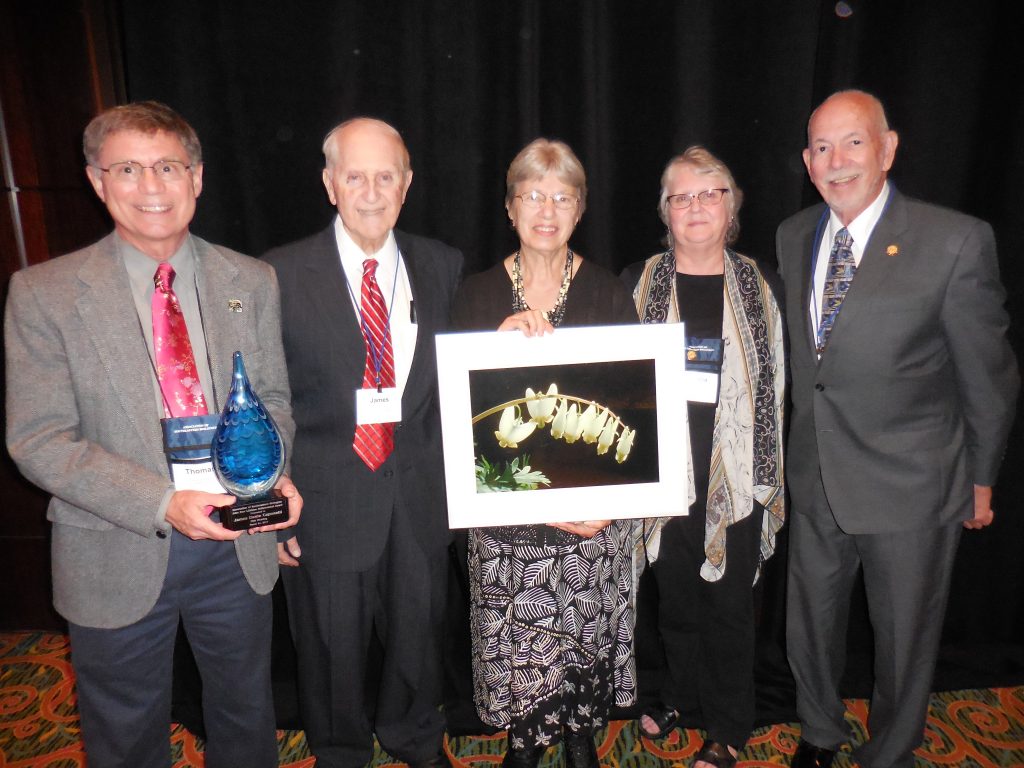 We would like to offer a big congratulations to Dr. Jim Caponetti for winning the John Herr Lifetime Achievement Award last week at The Association of Southeastern Biologist meeting in Montgomery, AL!!

A recipient of this award must have contributed in ways that set her or him apart from other members of the Association. In particular, the recipient must have:

Jim Caponetti joined the Botany Department at the University of Tennessee in 1961 as an Assistant Professor. Jim has remained at UT throughout his entire faculty career, and after retirement from the faculty, has continued to work within the Division of Biology at UT coordinating undergraduate student advising and helping students choose a major and an advisor. Jim has received Advising Awards from both the College of Arts and Sciences at UT (1995) and also from the Division of Biology at UT (2009). During his time as a faculty member Jim taught a wide range of courses from undergraduate courses in Botany and Biology for majors, Biology for non-majors, to upper-division courses in plant morphology, plant tissue culture, and economic botany. Additionally he taught a range of graduate courses, again focusing on plant morphology, plant tissue culture, and related methods courses. Jim served as a mentor for eight M.S. students, and four Ph.D. students during his career. He also served the department in a number of key roles including chairing several important committees (e.g., Graduate Committee, Curriculum Committee) as well as serving as Associate Department Head / Executive Assistant to the Department Head for 14 years. During past times when mastery of a foreign language was a requirement he served as the examiner for Spanish and Italian.

Jim has been deeply involved in service to organizations promoting science and research including the Tennessee Academy of Sciences, which he attended from 1963 – 2000, served as Secretary from 1966-1977, and then as President-elect and President in 1978-1979. Likewise, Jim served as Treasurer of the American Fern Society from 1976-2000, and Secretary-Treasurer of the Pteridological Section of the Botanical Society of America from 1977 1983. He has also found time to help out the local community, and has a long-standing role as a volunteer Pharmacist for the non-profit Interfaith Health clinic, for which he has maintained his pharmacy license.

Jim’s service to ASB began in 1972 when he first served on the Nominating Committee. In 1982 he was appointed to the Faculty Awards Committee, and chaired the Committee in 1983-84. Perhaps Jim’s most visible role in ASB started in 2000 when he took on the role of Print Editor of Southeastern Biology, the official publication of ASB. Southeastern Biology was the primary vehicle for distributing information about ASB – calls for abstracts, information on the annual meeting, issues of governance, highlights of research and faculty from around the southeast were featured in Southeastern Biology.

The flagship campus of the University of Tennessee System and partner in the Tennessee Transfer Pathway.